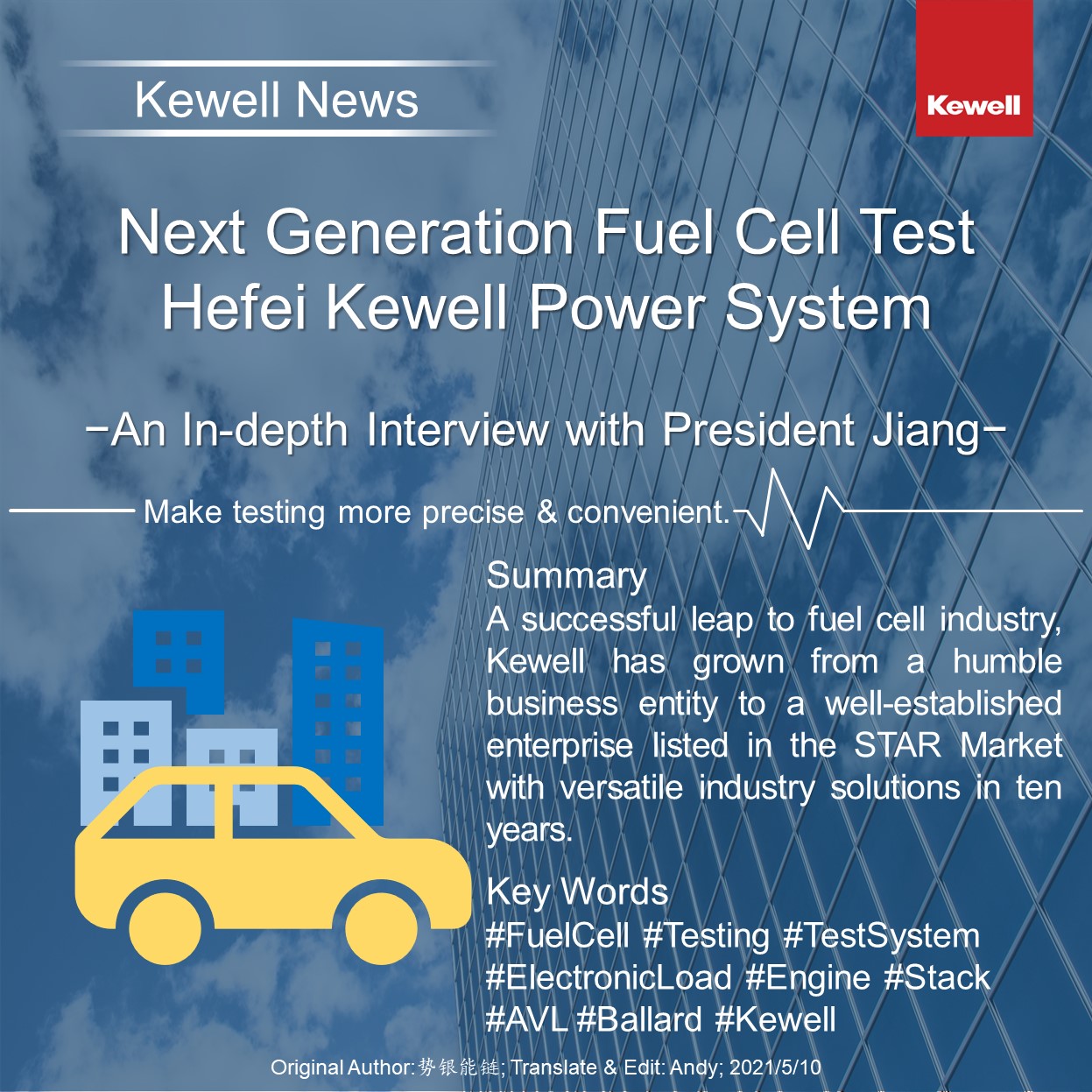 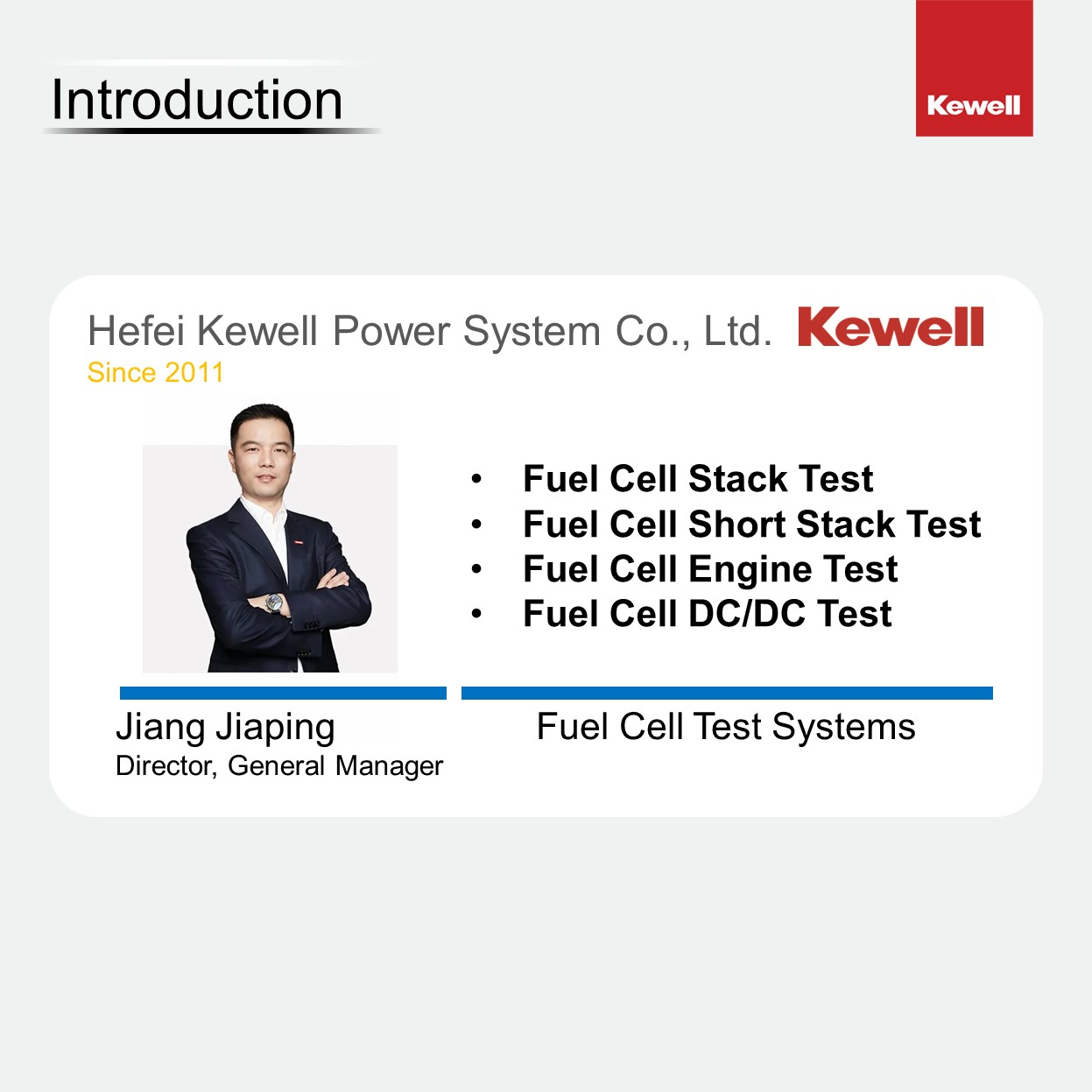 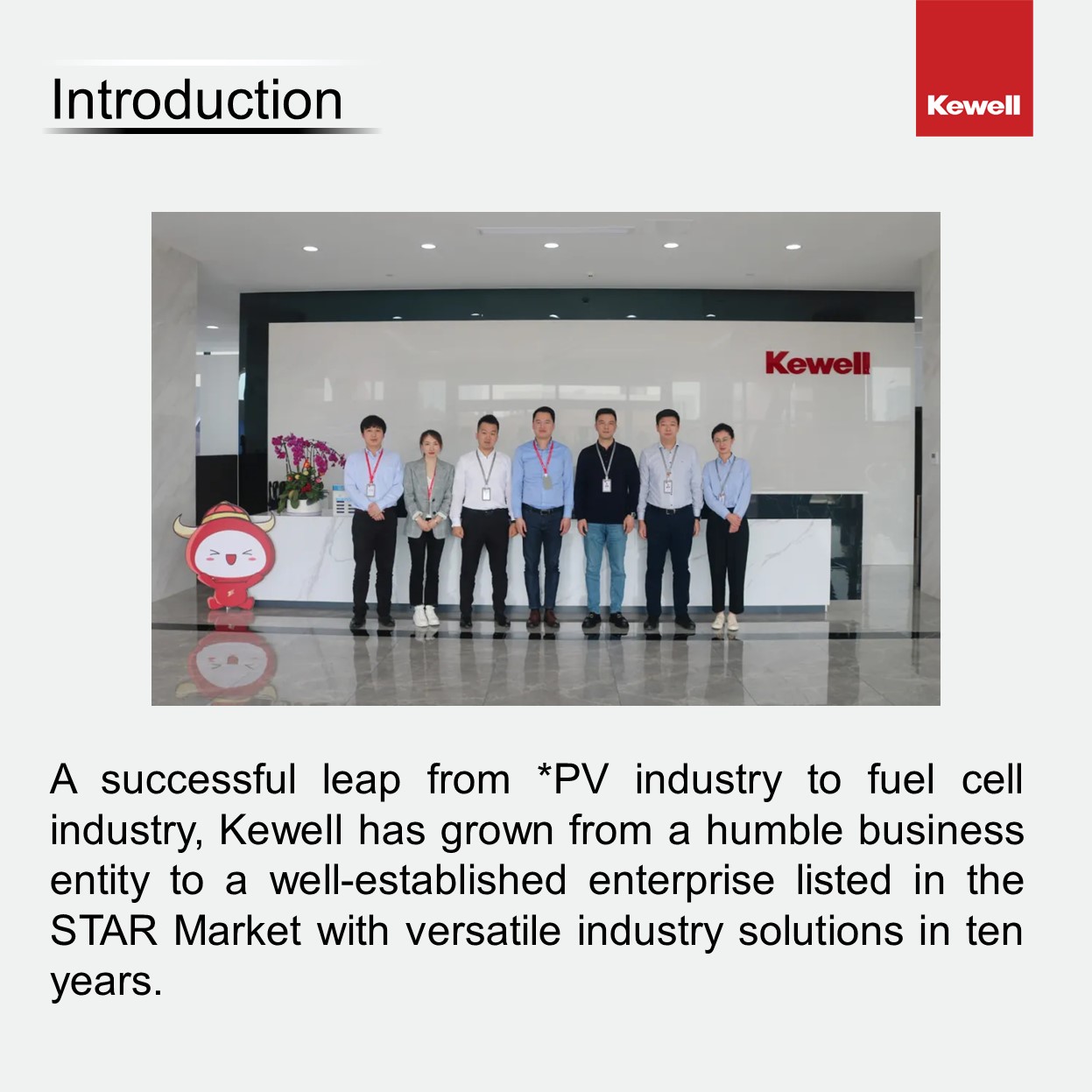 A successful leap from *PV industry to fuel cell industry, Kewell has grown from a humble business entity to a well-established enterprise listed in the STAR Market with versatile industry solutions in ten years.

Dated back to 2016, Kewell started to lay out in fuel cell testing application. In the next four years (2017-2020), they had launched four different products for the industry, including energy regenerative electronic load, DC/DC test system, engine test system, and stack test system.

As the core parts of powertrain system in a fuel cell vehicle, the performance and safety of fuel cell engine and stack are of paramount importance therefore grows the needs for adequate testing equipment.

In September 2020, Kewell was officially listed on the STAR Market, and became the first stock of fuel cell test supplies in China.

What’s done in the past won’t be enough to help them get through the next. The question is what will they do about their future?

Recently, we had the honor of bringing together two important leaders to discuss about the future planning, products, and services of Kewell.

In 2017, noticing the soar of fuel cell industry, Kewell was able to enter the terrain swiftly thanks to its existing base of expertise and experience in PV testing and three-electric system testing.

Jiang explained further on why they decided to enter fuel cell testing industry.

. On one hand, we received a lot of demands from our customers;

. On the other hand, there was no domestic market offering at then. China was entirely relying on importation on that score therefore we’re limited to relevant technologies. We hoped to change that and become the first local enterprise who could create our own solutions to fuel cell testing. That’s why we started the business.

Driven by industry trends and urgent demands from the market, Kewell was determined to accelerate the development of the business.

In 2017, Kewell launched the first product, an energy regenerative electronic load for fuel cell, replacing the non-regenerative, low-power models produced by Kikusui and EA. Not only is it able to simulate the operation characteristics of load, but also satisfy the high-power demands from the market.

Well received, the first prototype of fuel cell engine test system was given to SinoHytec, a top enterprise in the industry.

Beijing SinoHytec Co., Ltd. (abbr. SinoHytec) is a leading enterprise focusing on the research and development and industrialization of hydrogen fuel cell engine technologies. Their products are mainly applied in commercial vehicles. It is one of the few companies with independent core intellectual property rights, realizing the mass production of fuel cell engines and stacks in China.

Revealed in their prospectus, SinoHytec sold 498 sets of fuel cell engine systems in 2019, the highest shipment volume in the industry that year. They are indeed the forerunner to drive commercialization process of hydrogen fuel cell engines in China.

“It meant a great deal to us to make the first sale to such enterprise at the start and be well received by them.” Jiang remarked.

Systematic products are oftentimes more complicated and technical demanding to realize than independent test power supplies. Companies will need to enhance their comprehensive technical capabilities and service capabilities to drive the product development of test systems for various application industries.

Thanks to the wide application feature of test power supplies, Kewell was able to step into fuel cell industry smoothly by taking the advantage of its existing base of knowledge, developing series of products at early times, including fuel cell DC/DC test system, engine test system, and stack test system.

“Compared with our peer competitors, Kewell owns another advantage, a rich talent reserve. We have meticulous talent arrangement for each department, which turns to our advantage.” Jiang explained on how Kewell can craft new products successfully.

In addition, Kewell is constantly perfecting their R&D teams with the aim of serving customers across industries, disciplines, and technical platforms.

“We have talent cultivation and recruitment plans in many key universities around the country, and spared no effort in building a professional, international team.” Jiang added.

In September 2020, Kewell was listed on the Science and Technology Innovation Board (abbr. STAR Market) of the Shanghai Stock Exchange, becoming the first domestic test power supplier to land on the STAR Market.

This meant a brand-new stage for Kewell as large funds can be acquired and be used to expand and develop the company.

For power supply industry, the gap between order placement and delivery time is full of uncertainties, particularly customized products. In addition, some core parts would have to be imported, making the production time even longer because of the overseas shipment. To shorten the gap and rid of all uncertainties, having enough inventory is important.

“With sufficient funding, we can afford to invest in inventory to some extent, which allows us to shorten the lead time and better the service quality we can offer to customers.” Jiang remarked.

In the early spring of 2021, fuel cell business department became an independent segment of Kewell, with engine test system, stack test system, and DC/DC test system as the core, including single load test.

Jiang said that, this was the second milestone for our fuel cell business department. Kewell is focusing its resources on the terrain in order to accelerate the development progress while providing excellent products and services to customers.

“With sufficient funding, we can afford to invest in inventory to some extent, which allows us to shorten the lead time and better the service quality we can offer to customers.” Jiang remarked.

In the early spring of 2021, fuel cell business department became an independent segment of Kewell, with engine test system, stack test system, and DC/DC test system as the core, including single load test.

Jiang said that, this was the second milestone for our fuel cell business department. Kewell is focusing its resources on the terrain in order to accelerate the development progress while providing excellent products and services to customers.

In 2021, Kewell produced a high-power fuel cell stack test system at 150kW and completed debugging within two weeks over at SinoSynergy, satisfying all the activation test requirements of Ballard Power Systems.

Jiang added, it usually takes one to two months at least to complete such test. And Kewell managed to do that in two weeks and earned the recognition from the customer.

Jiang summarized three reasons for this: Technical Capabilities, Teamwork Service, and Dedication. He called it The Three-Iron-Triangle Guarantee. 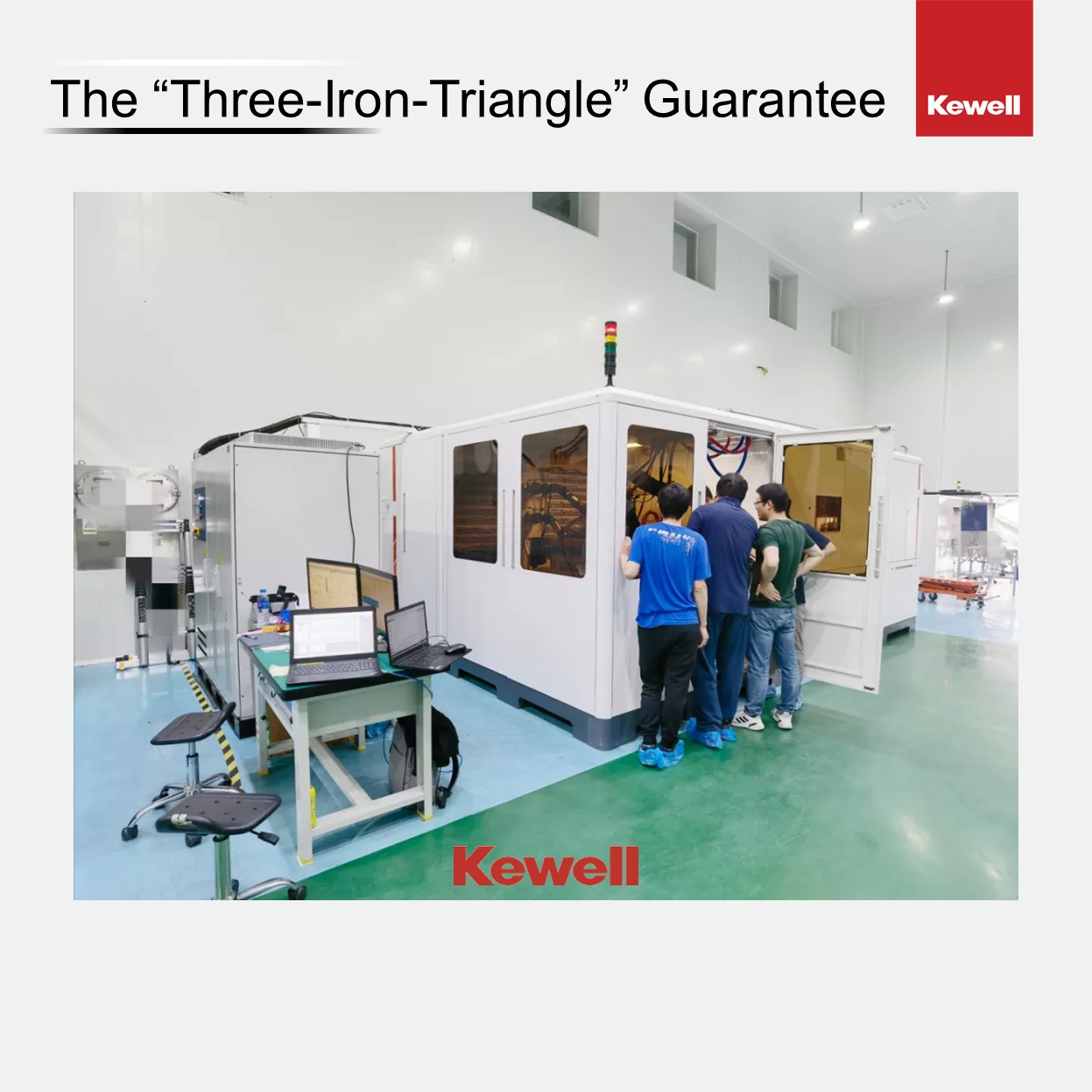 On the technical part, Kewell’s products marry cross-discipline technologies such as gas heating, humidification, flow control, non-hydrogen calibration, and high precision test platforms with wide measurement scale etc. They provide the technical basis for Kewell’s own solutions to software simulation, measurement, and control technologies, data platforms, and system integration etc. Mechanics, electricity, materials, and computer science, all of which have added up to a great technical barrier.

On the product part, the structure design of second generation is largely built on the first generation. They envision products that can be accepted by the market on a timely schedule.

On the team part, the best case to demonstrate Kewell spirit is the SinoSynergy project. Seven people were determined to complete product delivery and debugging services for the customer on time with precision. They honored their promises not only with utmost respect but also with professional manner.

Jiang said, the delivery volume of high-power stack test bench, like the 150kW model of Kewell, is considerably low at present. But, Kewell is able to keep receiving orders from the industry, particularly from an exemplary enterprise SinoSynergy.

Revealed by Kewell, the revenue of fuel cell business department against total revenue has grown from 2.54% to 21.74% during 2017-2019 with business volume increased by 16 times.

It’s just a brand-new chapter for the company to be listed in the market. There are higher stairs to climb and harder battles to come.

Kewell’s strategic goal is to become a professional test power supplier across application industries, power levels, and the globe. Speaking of future planning, Jiang said, fuel cell business department will be of strategic importance for the company. Continued investment on product development and market promotion of the industry can be expected. Afterall, becoming the AVL for fuel cell test supplies has always been the long-term ambition for Kewell.

A high-tech company based in Austria, AVL enjoys best-in-class fame across the globe in automotive and engine industries.

Established in 1948, AVL has grown from a humble workshop to an international high-tech corporation covering the research and development, designing, consulting, and manufacturing of engines. They can also provide complete solutions to system integration, measurement, test systems, and advanced simulation programs.

“We have set the goal for 2021 at the beginning of this year, and implemented it to the department. Judging from current circumstances, we are likely to achieve it in advance and exceed it. The goal for the coming year will be doubled with sales income of 2021 as index.” Jiang concluded.

The directions are clear. Kewell continues to thrive like an ever-glowing sun.