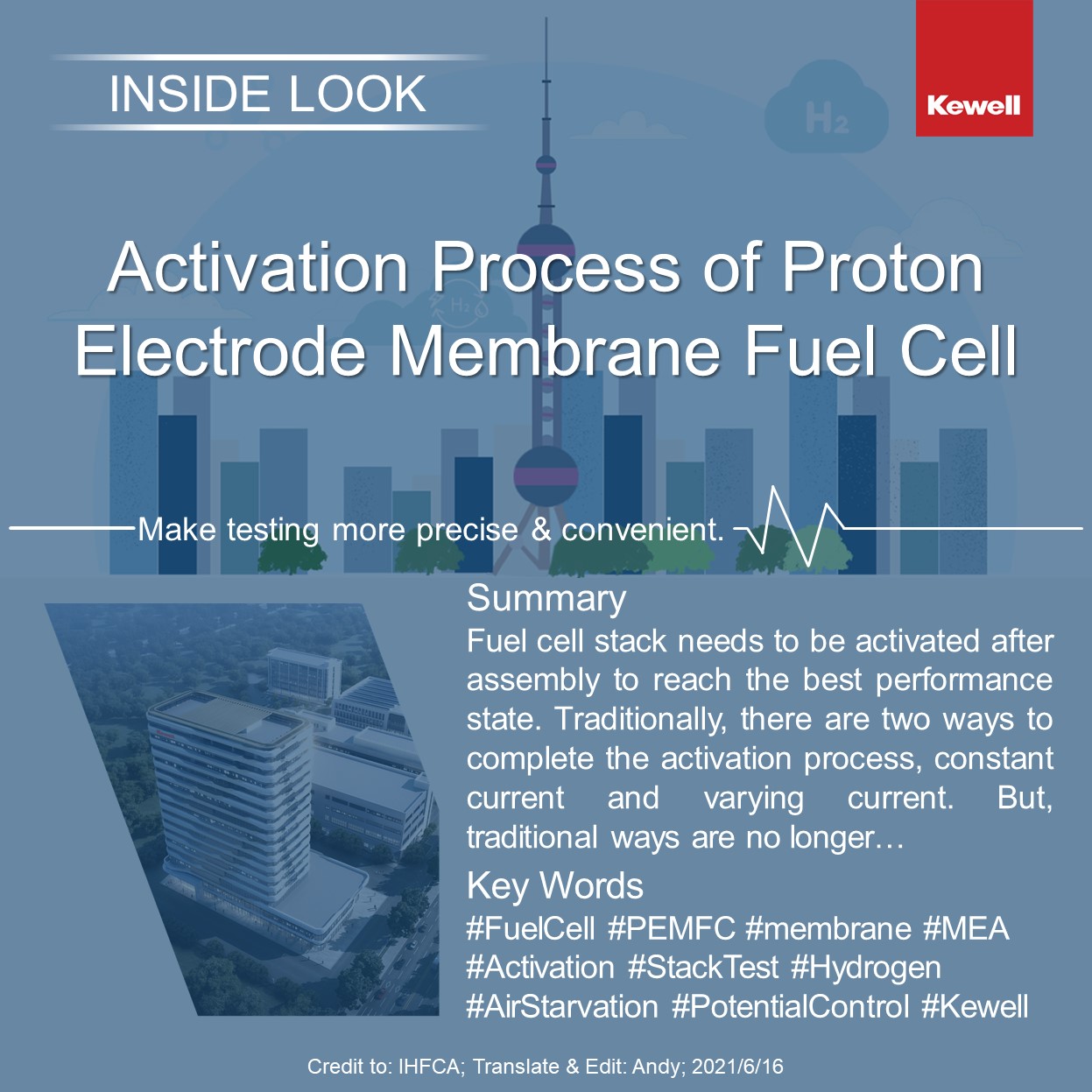 Fuel cell stack needs to be activated after assembly to reach the best performance state. Traditionally, there are two ways to complete the activation process, constant current and varying current. But, traditional ways are no longer compatible with the current development of fuel cell industry as they are too time-taking and hydrogen consuming. Therefore, the call for a fast and low-damaging activation process has emerged.

a) Humidification of PEM;

d) Increase the activity and using rate of catalyst layer. 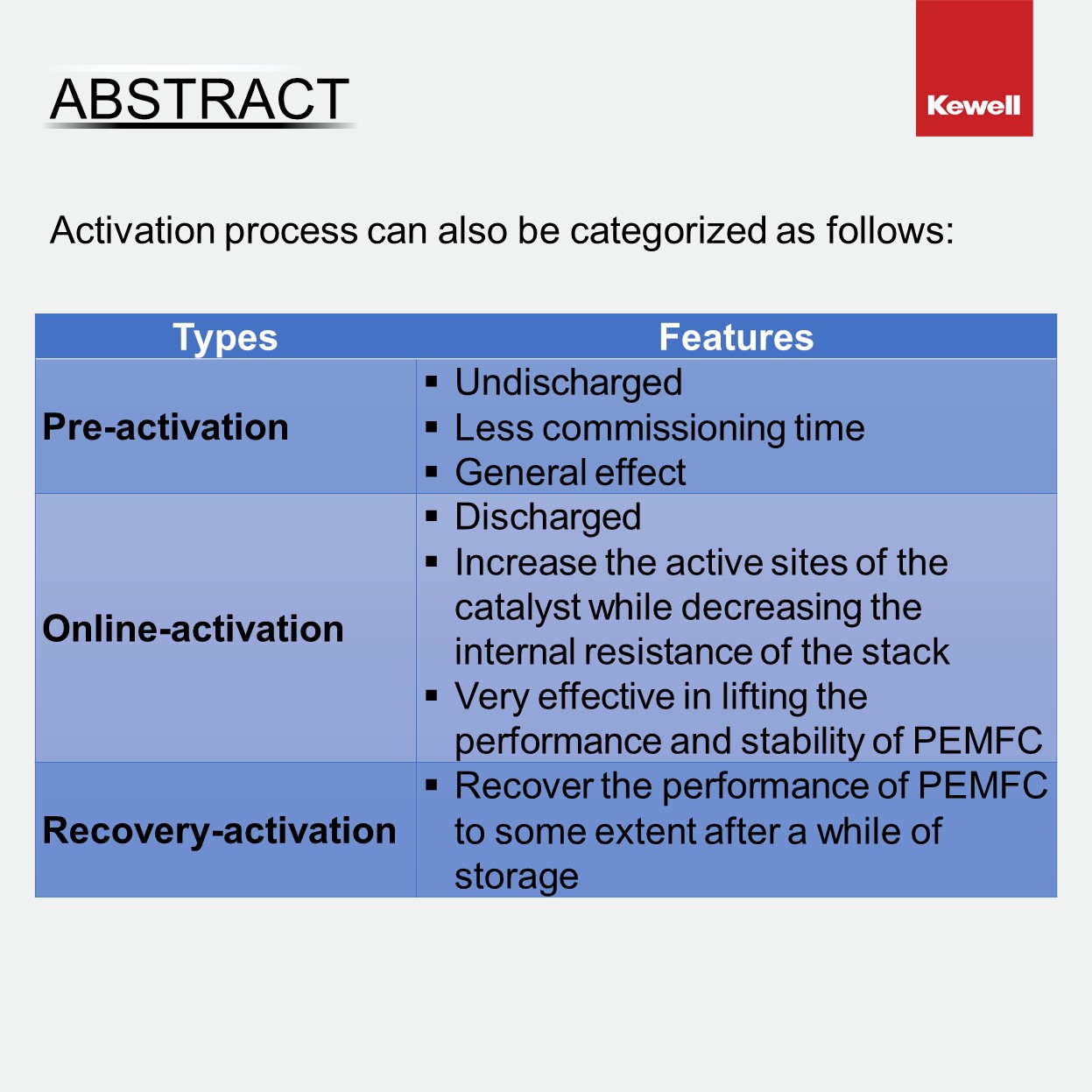 Current control can be divided into three types:

Amongst the traditional methods, c) is the most widely adopted approach as it takes less time while providing the best result to stack performance. Some lab reports suggest that cycling constant voltage activation is even more effective than current control methods due to the fact that current control methods are more prone to silver nanoparticle clusters at the MEA therefore decreasing the ECSA of catalyst.

Electrode short-circuit is a rather special way to activate a stack by constant voltage control. It is commonly adopted in pre-activation and independent activation process. By bridging the positive and negative electrodes, voltage level can be kept at 0V. Then input water and gas at certain levels into the system, switching the gas flow at two levels (high and low) while ensuring the reverse polarity time of single cell is within safe range. Proven by experiment, the activation time of such method can be shortened to 1/10 of traditional methods while reducing hydrogen consumption significantly.

On top of that, the activation effect can be greatly enhanced by increasing the gas temperature and pressure as the using rate of catalyst is greatly improved as well.

Hydrogen pump activation is an activation method that improves the performance of a fuel cell by transferring hydrogen from one side of the membrane to the other. The chemical equation is as follows:

The principle of such activation is to reduce the overpotential of REDOX. In this process, the porosity and tortuosity of the catalyst layer are changed due to the hydrogen precipitation process, and the number of three phases of the reactant, catalyst and electrolyte in the catalyst layer is increased.

The activation process can be summarized as follows:

. Use pure hydrogen on the anode side. Replace the air on the cathode side with nitrogen;

. Use external power supply with current density at 200mA cm-2;

. Hydrogen is oxidized at the anode. Protons are reduced at the cathode by travelling through the membrane.

In addition, a Ballard test showed that the average cell voltage can be increased by 20-32mV by passing dry and unheated hydrogen through the anode and cathode sides of the cell for five minutes. Another test showed that a brief exposure to the heated and moist hydrogen (80°C, 100%RH, for 5 minutes) allows the cell to reach to nominal operating voltage (within 95% of the normal voltage). 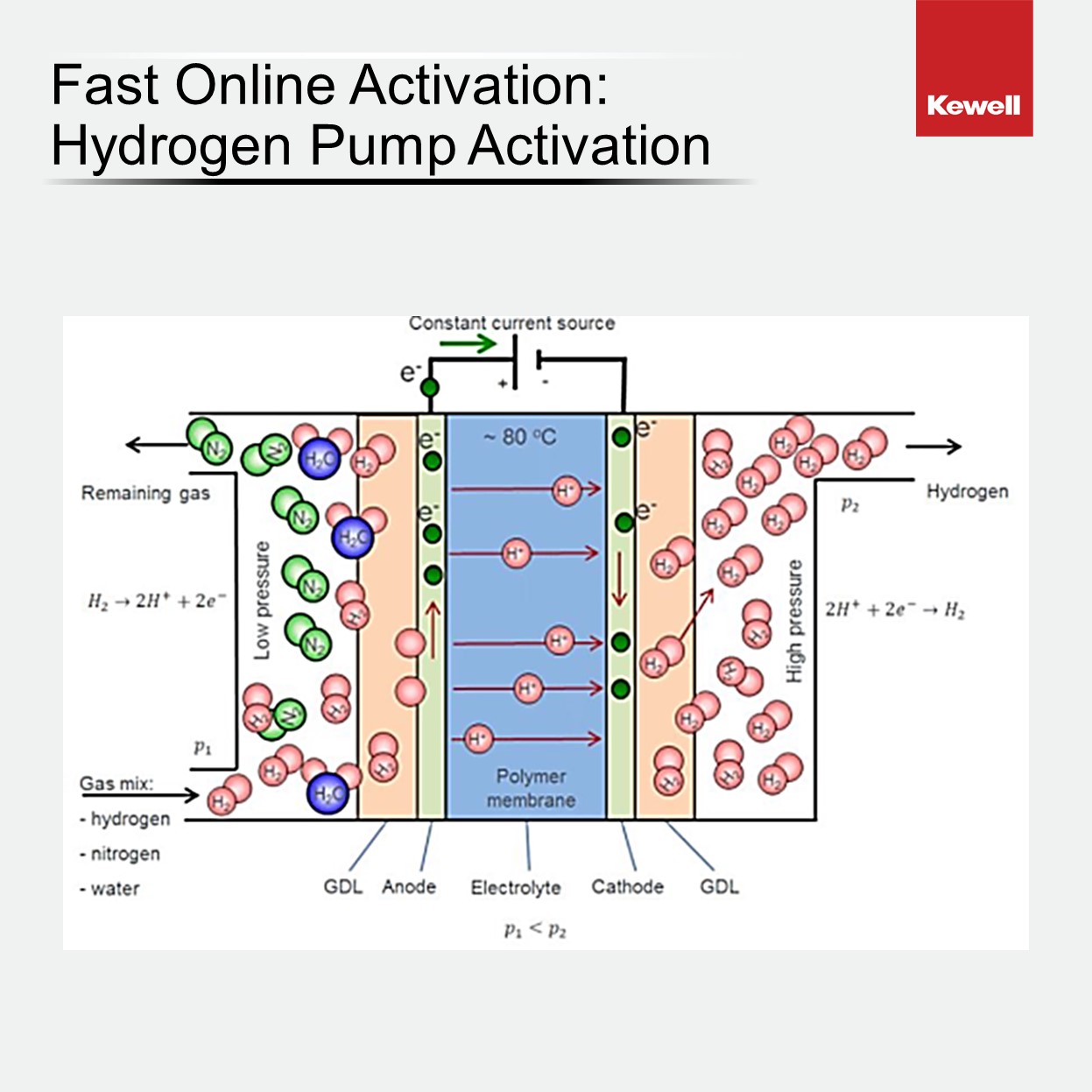 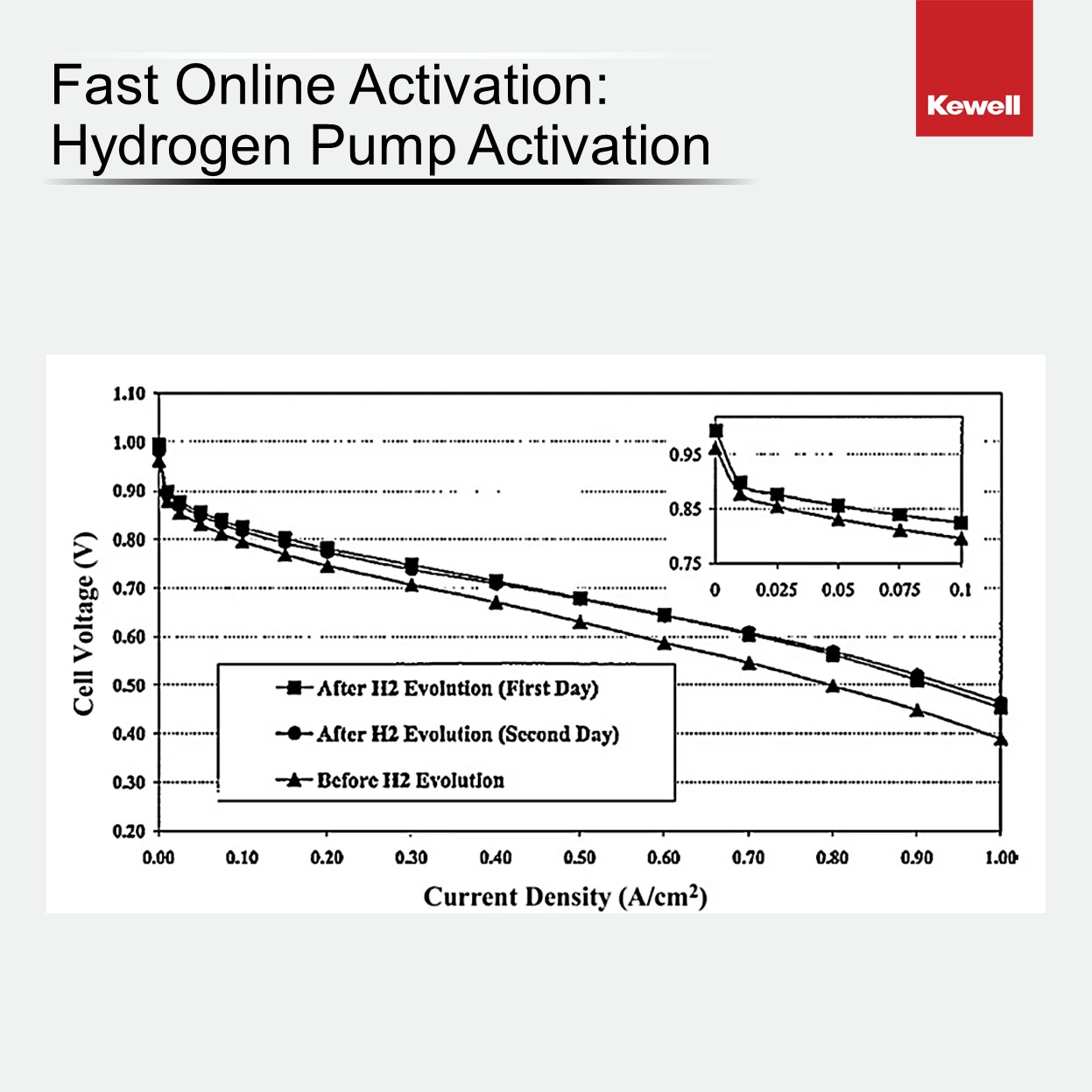 The cathodic air starvation method is a brief loading process that works under non-oxidant condition to activate a stack. In the absence of oxidant, reduction can be realized at the cathode. The process can be summarized as follows:

. Load the system without air supply, allowing the voltage level to drop down to 0V or so.

. The method can be used to activate a stack right after production, or applied to recovery-activation. 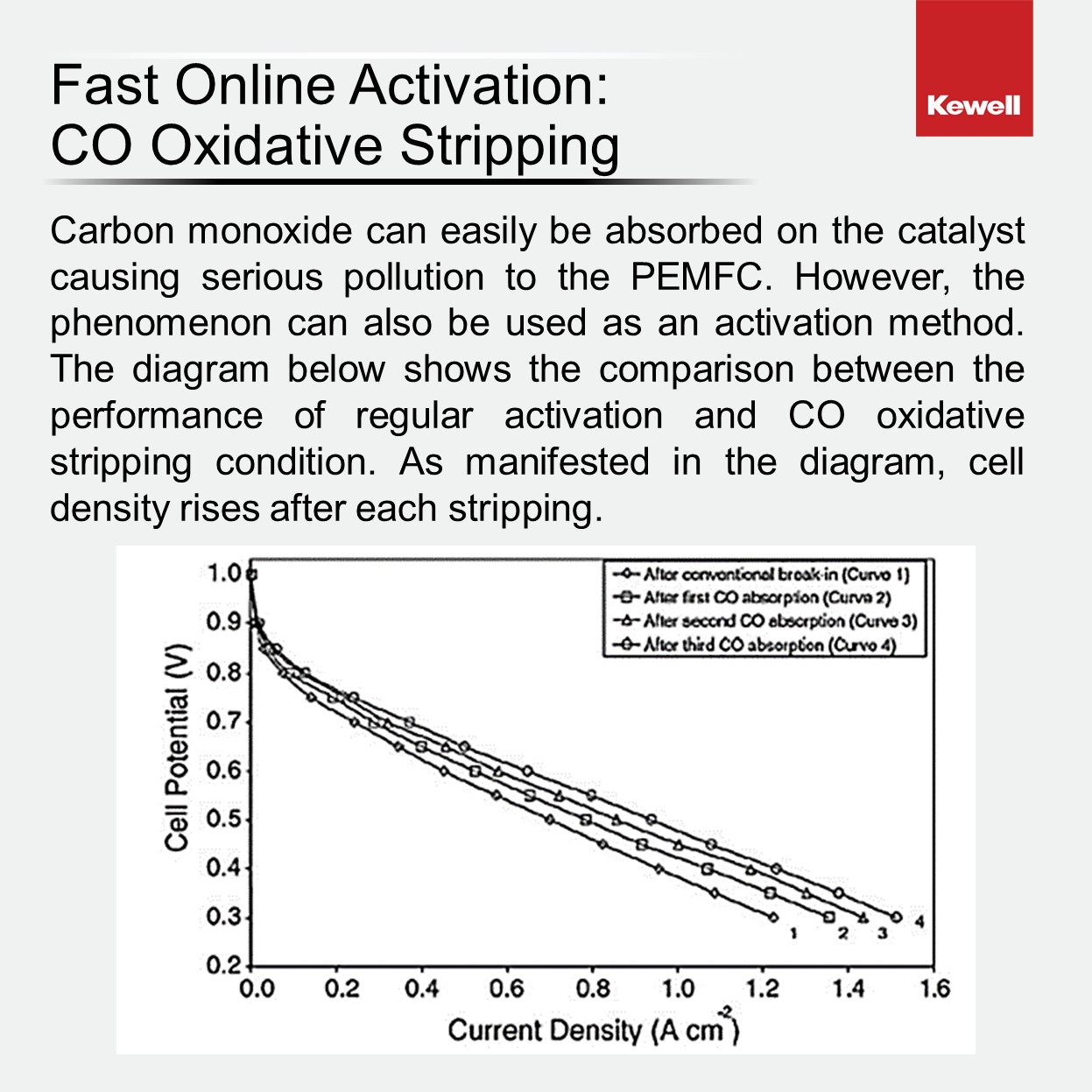 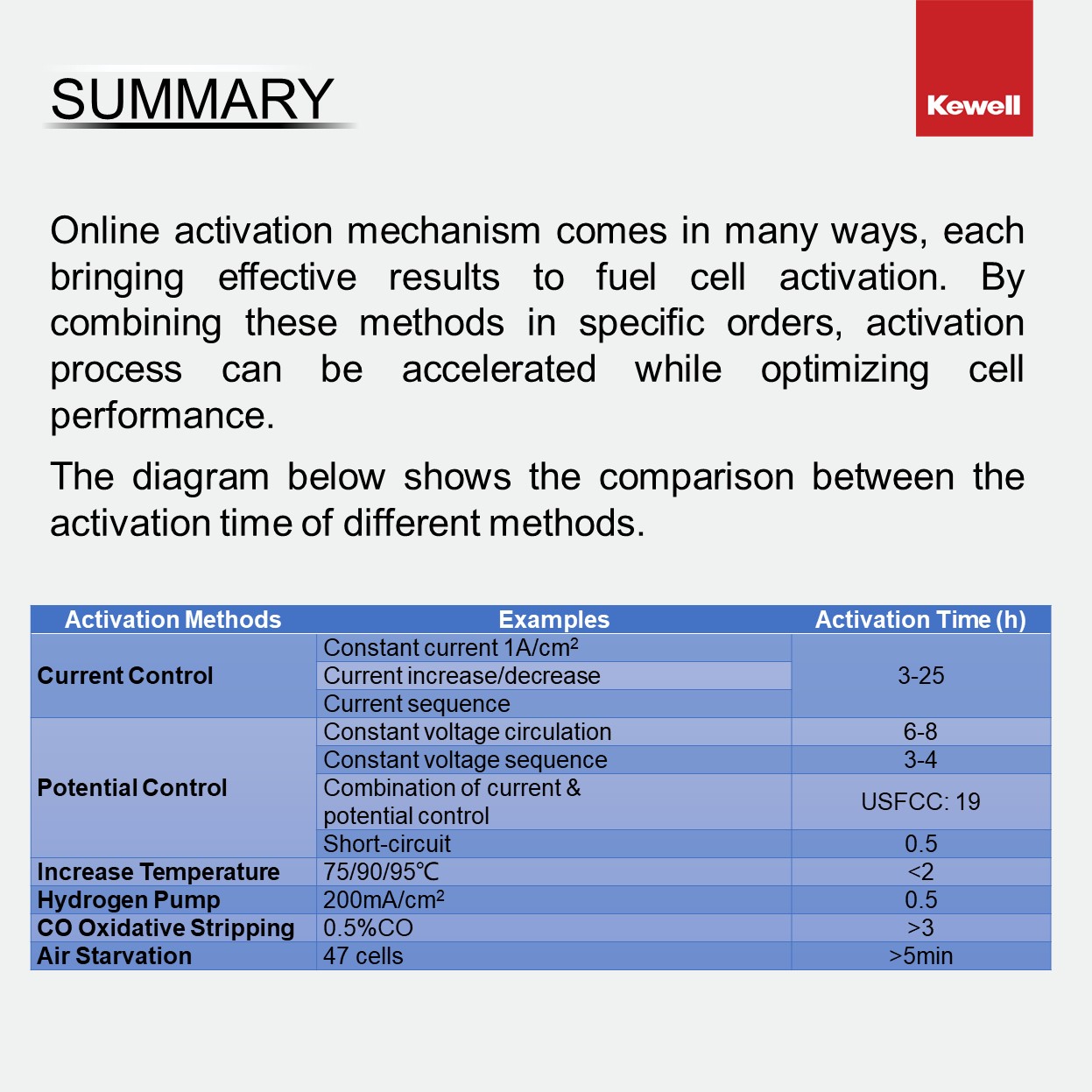 Carbon monoxide can easily be absorbed on the catalyst causing serious pollution to the PEMFC. However, the phenomenon can also be used as an activation method. The diagram below shows the comparison between the performance of regular activation and CO oxidative stripping condition. As manifested in the diagram, cell density rises after each stripping.

Online activation mechanism comes in many ways, each bringing effective results to fuel cell activation. By combining these methods in specific orders, activation process can be accelerated while optimizing cell performance.

The diagram below shows the comparison between the activation time of different methods.

Inappropriate working conditions such as temperature, RH, potential, and duty cycle, can cause serious impact on the microstructure of MEA, therefore affecting the performance and durability of MEA in the long run.

However, it is also critical to keep the activation process time-efficient and cost-effective. To satisfy both goals, many leading companies have developed their own patented activation processes. Fuel Cell China, for instance, has adopted the cathodic air starvation method to activate a 160-layered fuel cell stack. Hydrogen consumption is reduced to 1/6 of the traditional way, saving 60% of time. Hyundai has applied for a patent on hydrogen pump activation. Activation time is reduced to 35 minutes, with performance state reaching nearly 100%.

The performance of fuel cell stack needs to be recovered after a while of storage. Similar to activation process, recovery process exposes the cathode to hydrogen gas, revitalizing the fuel cell after a long period of storage.

To avoid repeated activation, there are a few ways to prevent from momentary performance loss for fuel cell. The main mechanism is to prevent the formation of oxides and/or hydroxides on the cathode catalyst. This method also includes applying an electric potential to the fuel cell during storage (e.g., from 0 to 0.6V/layer), storing it at temperatures below the ambient temperature (e.g., under -20 ° C) or injecting an inert gas to the fuel cell cathode.

b) Load works under 0V, satisfying the requirement of cathode air starvation test;

d) Bypass pipe design at both inlet and outlet for anode and cathode gas. Match for H2 Soak Activation and satisfy the requirements of EoL testing;