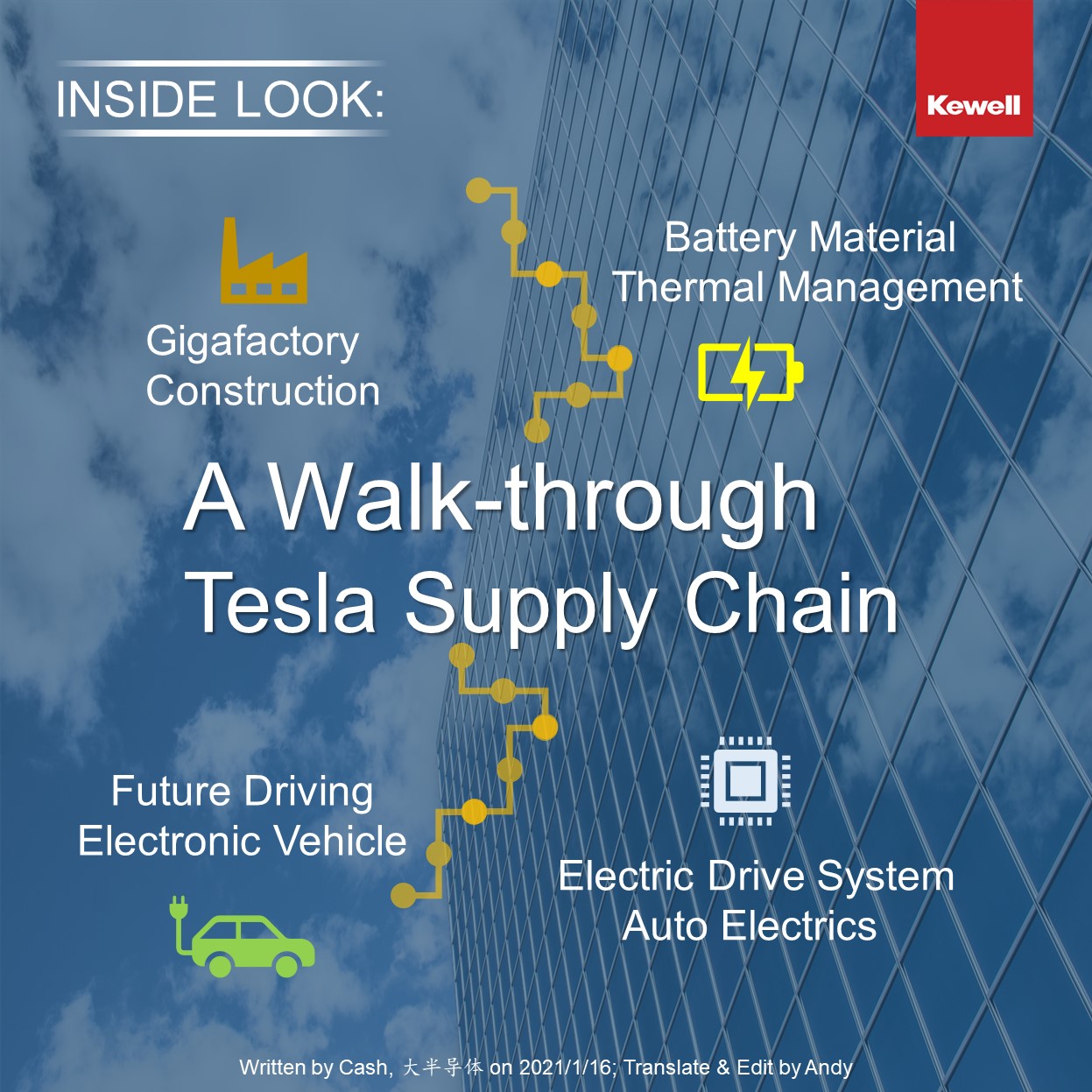 In a recent data reveals, Tesla produced a total of 509,737 vehicles in 2020, their very first time to realize an annual production capacity of over 500K vehicles. As for delivery quantity, they delivered 499,550 vehicles last year, which was 36% higher than 2019, slightly fallen behind their mark of 500K vehicles set earlier in 2020.

“Thanks to “China Speed” and “Made in China” initiatives, Tesla Shanghai Gigafactory is moving towards an annual output of 1 million units. The production capacity of Model 3 and Model Y will reach about 500K units in the future.”, said Elon Musk, CEO of Tesla, at the 2020 annual general meeting of shareholders.

At present, Tesla operates 5 factories around the world, including 3 in the US, 1 in China, and 1 in Europe. The Berlin factory in Europe will start to produce the new version of Model Y at the end of Q1 2021 at the soonest. The progress of their own battery plant, however, is a little behind in schedule. At Austin, Texas, construction of the factory has already begun and will be put into production in June or July 2021 at the soonest. The factory will mainly output electric pickup trucks and Semi trucks.

With an ambitious move, Tesla plans to build 10-12 Gigafactories around the world.

Deutsche Bank commented that, 2025 could be the “Breakthrough Year” for Tesla, where it expects revenue to reach $94 billion and vehicle deliveries to exceed 2 million units. However, the near-term forecast still depends on its production capacity and demand growth, particularly on their pace of construction for its Gigafactories in Texas and Germany. 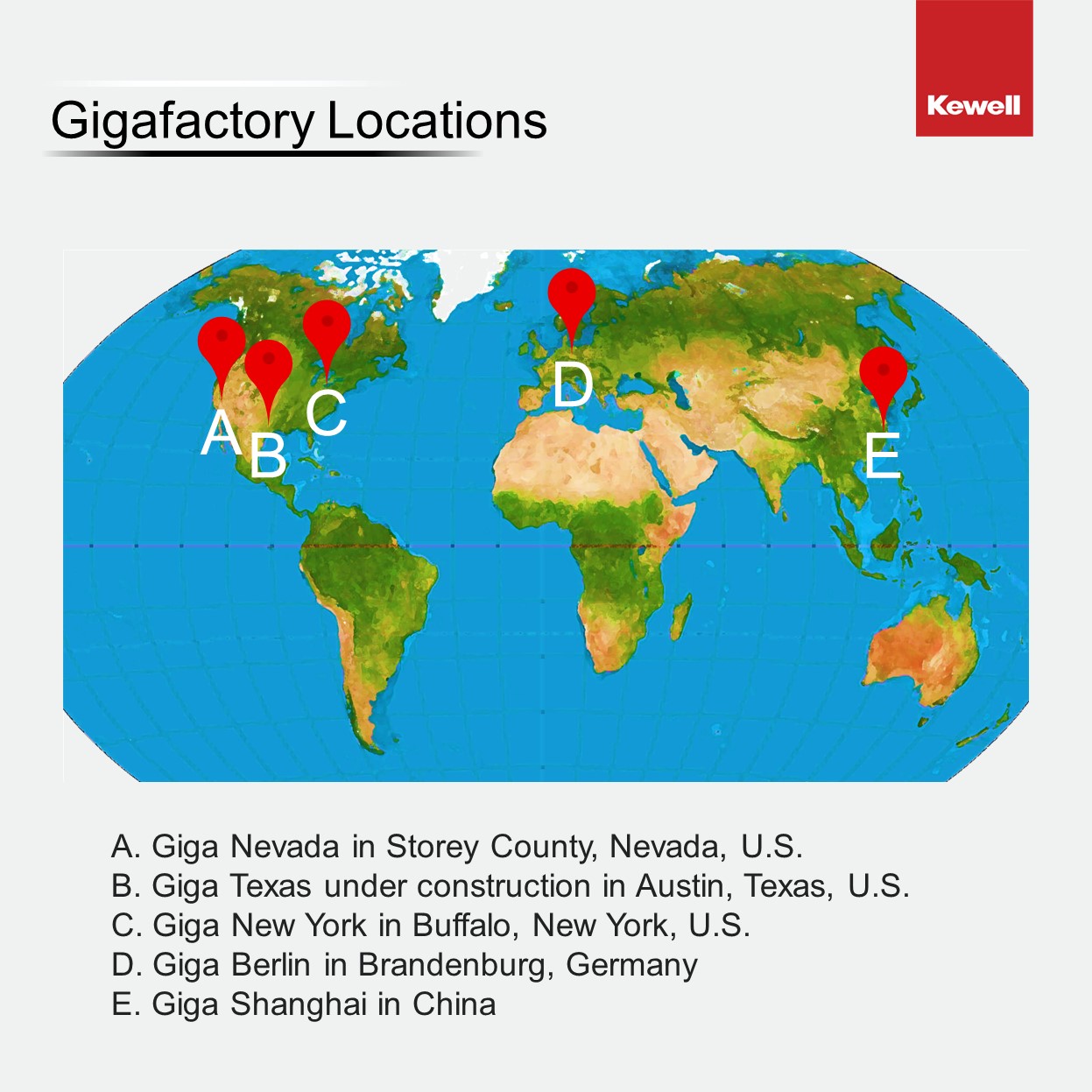 Tesla stands out from the market for several reasons. Its core competencies are well-established spare part , sufficient production capacity and competitive product prices. Their rich experience in traditional fuel vehicles has also helped them build their own signature brand, and form a strong, solid basis for crafting their own spare parts. 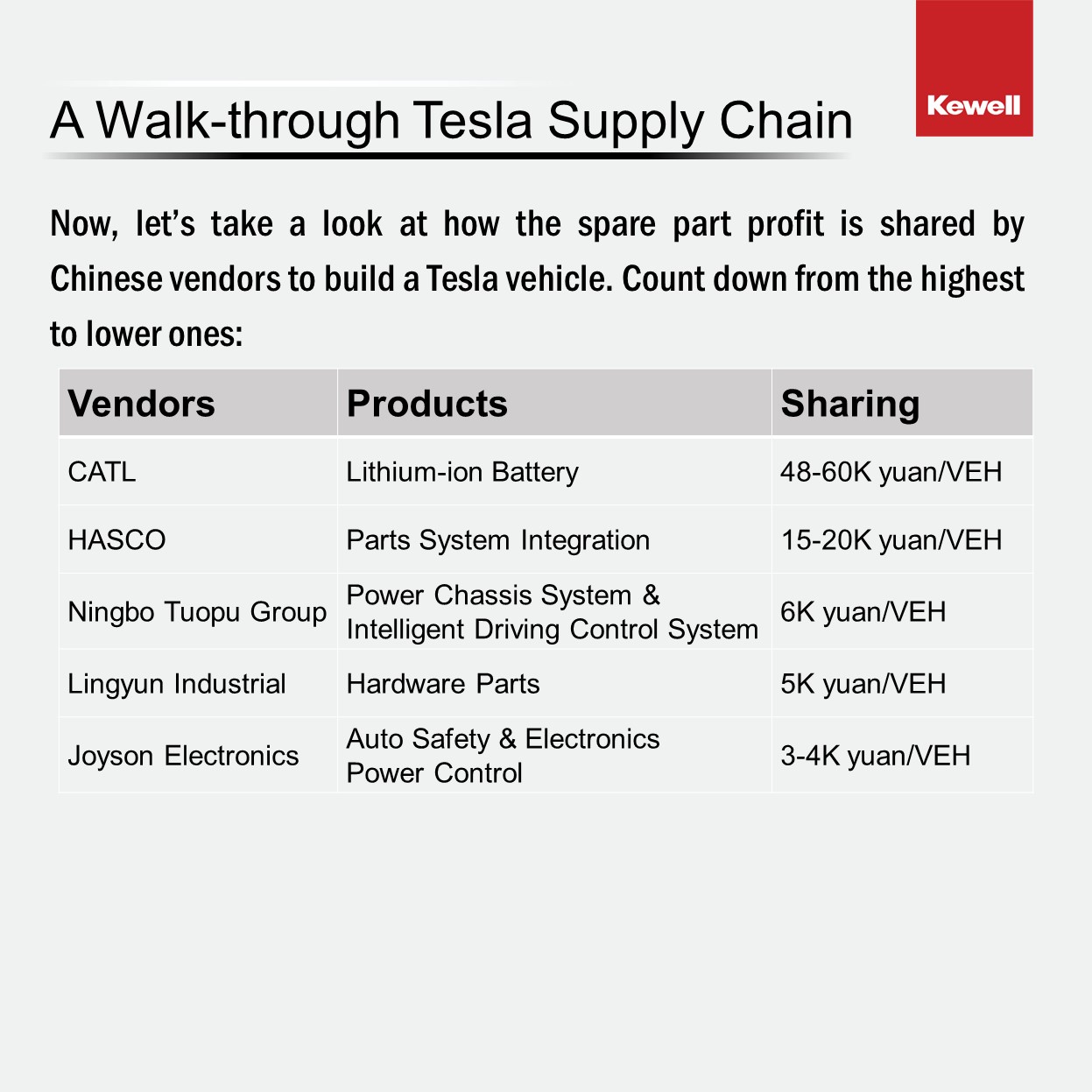 Now, let’s take a look at how the supporting part profit is shared by Chinese vendors to build a Tesla vehicle. Count down from the highest to lower ones:

a) CATL, suppler of lithium-ion batteries, makes around 48-60K yuan per vehicle.

Another thing to mention is that Tesla has a good reason to purchase their parts locally, to save cost. The transportation cost of most parts in the industry is simply high. As a result of this, the success of Tesla, measuring by its booming sales, can help boost the development of its relevant vendors. And eventually, these vendors with strong R&D ability and large-scale advantage will become a part of Tesla supply chain and gain greater room for growth and premium prices. Companies get to share the feast are those who manufacture batteries, battery materials, thermal management system and electrical drive system and so forth.

The three-electric system consists of 3 parts, battery, electric motor, and electric control. It is at where EV makes the big difference with fuel vehicles and there is a high technical barrier to climb over, even amongst EV manufacturers. It is so critical and unique that once enrolled into Tesla supply chain, you will be hard to get replaced by other vendors and gain greater ground for growth.

–Panasonic and Tesla Have Grown together

Panasonic has been supplying batteries to Tesla. Tesla roadster mainly uses lithium cobaltite battery (18650), and the rest models are NCA type battery. The two companies signed a contract worth $7 billion in 2013. In the second half of 2017, their joint venture of Gigafactory in China, was put into production, producing cylindrical 21700 battery for Model 3.

Tesla used to be exclusively supplied by Panasonic. But in 2020, LG was introduced to its vendor pool as well. And CATL, another Chinese firm partaking the business, supplies to Nanjing factory, reducing Panasonic’s share to 70%. On the other side of the world, Panasonic remains strong in their position by building a battery plant in Norway and is expected to support some European factories.

–LG Remains as The Main Battery Supplier for Now

LG is currently the main supplier for Tesla Gigafactory in Shanghai, supporting Model 3 long range and Model Y. Their trade volume is expected to double in 2021.

Previously, Model 3 was solely supplied by LG. But, starting from October 2020, the standard range version will slowly be taken over by CATL with its lithium-ion batteries. At the early stage, Model Y will still be supported by LG. Last year, LG equipped itself with 10gwh production capacity for Tesla Shanghai, which was to its full extent.

In 2021, Tesla Shanghai will be supplying to Europe and Southeast Asia. The overall output is estimated to reach 400K-500K units, while LG is expected to supply 200K-300K units, with power battery demand exceeding 20gwh, doubling year-on-year.

What’s worth notice is that LG’s production materials are heavily involved with local, leading vendors, benefiting them to a full degree. Compared with Panasonic’s closed supply system, suppliers for LG Nanjing are mostly Chinese firms.

Model 3 standard range version, powering by lithium-ion battery, has been mass produced in China. Output is expected to reach over 150K units in 2021. In February 2020, CATL won itself a promising future by signing a purchase agreement with Tesla. They began to supply lithium iron phosphate battery for Model 3 standard range version in September, with electric power of 55kwh. In return, CATL can expect to sell over 150,000 units of batteries by the end of this year.

Innovation can be found in each generation of Tesla.

A new heat pump system is introduced in the thermal management system of Model Y. By integrating parts and innovative structure design, it is the most compact heat pump available.

Aside from the three-electric system, automotive electronics is also at where an EV rises in values comparing to fuel vehicles. A high technical barrier is also true here, making it difficult to join Tesla supply chain while less likely to get replaced. And for those who do have joined, continuous growth can be predicted in their revenue.

At present, Chinese vendors are supplying hardware parts in primary. Core technologies such as software control, ADAS/FSD, are in the hands of Tesla. A barrier is there for vendors, making it more challenging to break through.

A recent statement made by Tesla reveals that, the diameter and height of its large cylindrical battery are 46mm and 80mm respectively. In addition to that, they are even able to remove the battery tab by using laser technology. Current flowing distance was cut short thanks to the removal, making the battery more efficient in terms of energy transmission (x5), power (x6), and battery life (x1.16). They can mass produce such type of battery, cranking up the production line by 7 times, and reducing production cost by 14%. Energy density can reach 200wh/kg above.

“Tesla remains in the best position for electronic automotive and autonomous driving market, thanks to its successful combination of labors, technologies, business model and funding source.” commented by Adam Jonas, analyst of Morgan Stanley.

“Aside from that, what’s worth noticing is Tesla is not entangled with environmental responsibility, unlike any of its present competitors in traditional automotive industry. We believe, generally speaking, their business model allows them to move faster and, in their favor, to earn more income from regular mobile services than competitors.”